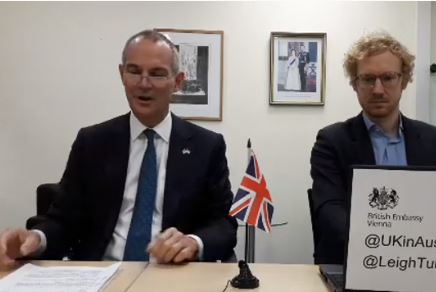 HE Leigh Turner did a Facebook Live video Q&A today (16.11.2017) from HM British Embassy in Vienna – the 45 minute videocast is worth a watch through Facebook although, given that not everyone is on Facebook, as well as embedding it,  I have also summarised the key points from my understanding. I was pleased that my two submitted questions were both covered – one in relation to “social inclusion” – and how the Embassy can still help those British citizens who are not online (part of this boils down to my recently helping someone not online to do some paperwork). I have tried to do a similar write-up to the one I did  about the Facebook Live chat with Julia Longbottom.

The videocast was intended to answer questions for British citizens, particular in relation to Brexit and the aftermath of the EU leaving the EU, trying to clarify where we are regarding negotiations and to address concerns about citizens rights. First of all the some references were given for sources of further information:

1) Home Office Newsletter (for UK citizens in Europe)
2) UK in Austria Facebook Page
3) UK Citizens in Austria Group (not affiliated to the Embassy, although the ambassador will speak at one of its events).

It was also mentioned that the outreach role of the Embassy remains an important one in order to establish issues about citizens rights.

Currently negotiations with the EU are still dealing with “Exit Questions” – and three topics dominate, namely a) N. Ireland b) financial settlement c) citizens rights. Media reports seem to portray a varied picture, but the Ambassador remarked that there has been “Very good progress on a number of areas”, although others are “still outstanding” i.e. not fully resolved, including the following:

The resolution of the “exit issues” would hopefully open up the possibility to start discussing the future relationship (i.e. future issues) although media reports question whether negotiations are far enough advanced for progress at the next round in December 2018.

Turning to the questions received both in advance and while live, the immediate caveat is that while matters are agreed in principle, such an agreement is dependent on a Brexit deal – i.e. will not apply in the event of “no deal”.

Embassy role post-Brexit if UK citizens need work permits (A. Tester): Ambassador highlights “good news” that EU has agreed in principle with UK that permanent residence (PR) will continue to apply for those having had 5 years lawful residence in Austria, while those not yet at the 5 year mark can continue to stay until they qualify for PR. Further guidance will follow once a deal has been made. Apparently to also cover those who came as students and subsequently stayed and now working. The deal would allow UK citizens to continue to live and work in Member State they currently live in but – UK government “would like” this to be extended to rest of EU countries – if EU willing to agree – the UK would reciprocate (as well as removing loss of PR if out of UK for over 2 years. [Note: I asked “You state at 09:47 that “permanent residence will allow citizens with 5 years lawful residence to be able to continue to live and *work* here” Can I check that the mention of “work” is intended rather than inadvertent here?” and: “You subsequently say that those currently living here for less than five years will continue to have the right to live here. In this case is the omission of *work* inadvertent or intended?”]

Recognition of professional qualifications in the EU: there will be no change in Austria – but qualifications would not be transferable to another country.

Children studying as UK citizens in Austria (born in CH and AT) (J. Hare): continued possibility to study although fees currently unclear “negotiating to maintain the same rights – i.e. live, work and study in Austria” – “No certainty on fees” not addressed yet as is a “future issue”. Referred to PM May’s desire for “closest possible links” to reassure. [Note: I asked: 12:57 Will there be a future need for students to nostrify British degrees obtained post-Brexit, since their degrees may no longer be automatically equivalent to degrees from Universities within the EU?]

Access to Labour Markets and lobbying between Austria and UK, and eventuality of no deal (D. Matthews): Ambassador has contacts with Austrian ministries, but negotiations of course conducted between UK and European Commission. “No deal not expected”.

Bilateral Trade between AT and UK; HM Embassy contact to incoming government over Austrian/British relations and citizens right (M. Tittensor): negotiations in this regard will only start once “future issues” are the subject of negotiations, and lowest possible barriers to bilateral trade is desirable. Regarding UK citizens rights – reiterated that “UK seeks best possible deal”.

[Full question: What is HM Embassy’s stance on the legality of “revoke and resume” in relation to British Citizens taking Austrian citizenship particularly in relation to the legal moment at which people resuming their British citizenship would therefore forfeit their right to Austrian Citizenship under Article 27 of the Austrian Citizenship Act of 1985? I don’t see it as quite the Kavaliersdelikt that some make it out to be as an applicant, by doing so the applicant is also making a false declaration on their application (part of the application includes a signed declaration that you have read and understood the penal provisions in the StbG). How realistic do you view the chances of Britons trying for dual nationality through award “im Interesse der Bundesrepublik” under Article 10a StbG?]

The Ambassador confirmed that while UK allows dual citizenship, Austria doesn’t and that therefore those applying would of course duly have to renounce their British citizenship, although it is felt that there is no need to naturalise. No real answer to the award “Im Interesse der Bundesrepublik” sub-question – although the non-committal answer (understandably!) confirms that this is likely to be a very special case, and not one that can be generally argued (I had included this part to try to draw a confirmation about the unrealistic prospects of a law change re: ability to hold dual (see also posts passim)).

Others asked about the UK lobbying for dual citzenship for Britons in Austria – There is no lobbying position where a legal position exists.

Reciprocality of Pensions (M. McNeill): a case-by-case basis applies for individual pension rights. It is advised that UK law allows worldwide payment. Intention to continue to up-rate pensions of UK citizens in EU, subject to a reciprocal agreement from EU. For those working in Austria but retiring back to UK: UK will recognise contributions both before. [Note: I asked at 26:25 whether reciprocality of pensions is dependent on a Brexit deal?]

Progress of Negotiations: there has been “lively political debate” but regarding the negotiations – clear positions are emerging re: “best possible deal for EU citizens” – detail is still a big issue. PM May’s Florence speech was touted as offering “big new impetus” in relation to the financial settlement for current budget period, to allow attention to then turn to “future issues”.

Social inclusion re: consular services (M. Bailey): [Full Question: a question on behalf of an elderly British citizen who is not online, who I recently helped with some paperwork: there seems to have been a paring back of consular services, presumably for cost-efficiency reasons. Amid the fresh challenges that the Embassy will face when Britain leaves the EU, can the ambassador give reassurances for those British citizens that are not so digitally proficient or do not have the means to submit online that there will still be adequate consular assistance provided to citizens who are not able to submit paperwork online, and to reassure the digitally marginalised that they will receive assistance and not be shunted to call centres in other countries? How will they be able to receive information from the embassy.] Thanks were given for assisting the elderly citizen and assurances given that adequate consular assistance is provided for those who need it- with a list of the services provided, although it was also mentioned that there is a certain push towards going online.

Question from an Austrian in the UK, re: how will UK government protect Austrians in the UK: Settled status for EU citizens in the is “other side of coin” of permanent residence in Austria and seems more or less decided. The cut-off point will be somewhere between now and 29.03.19 hope is that the procedure for SS will be “most simple, streamlined, analogous to cost of UK passport”.

Financial settlement: Why should UK pay anything? the response was that the UK Government believes we have obligations in current budget period that must be honoured.

Bilateral relationship: UK-Austria: building and cooperation? Ambassador states that UK submitted papers in Summer 2017 on internal security and terrorism as well as the external and defence relationship, and that it is “not a zero sum negotiation” and other work has started re: Culture, Education and Research. Regarding bilateral trade AT/UK imports and exports are significant and Austrian companies in the UK employ 30,000+ in the UK.

Multiple short stays in various countries and mobility in relation to Permanent Residence (M.Cook): it was advised that someone wishing to have PR in Austria would need to be here to be able to get PR through Austria, if not already qualified. Another question on Full UK Erasmus participation is a “future issue” therefore negotiations not started.

One Reply to “Facebook Live Q&A with HE Leigh Turner”